Today’s article is for men over the age of 35. If you are under the age of 35, you’re certainly invited as well; this doesn’t quite apply to you yet, but it will soon.

As I talk about in great detail in the Ultimate Younger Woman Manual, if you’re an older man pursuing younger women, your target market will be the Type Two younger women. These are women who are turned off by men their own age and vastly prefer to date older men, sometimes much older men. If you were curious, Type Ones are women who would never date a much older man and are disgusted at the concept (this is the largest group) and Type Threes will gravitate to men their own age but will happily date an older man as long as he has a decent amount of game and doesn’t come across as a creeper.

The bottom line is that the vast majority of younger women you will date will be Type Twos. They are the easiest to be successful with, by far. (Type Ones are more or less impossible and Type Threes are workable but take more time and effort.)

Here’s the problem with most older guys going after younger women: they try to act like younger men.

This is the exact wrong thing to do. Why? By trying to present yourself as younger, you are murdering the very trait which is most likely to attract your largest target market, the Type Twos.

These guys who lie and make their age eight years younger… no! I don’t think you should lie at all, but if you were to lie, I’d rather you lie and make your age older than make your age younger. Yes, if you did this, you’d actually be more successful with the Type Twos. It’s true you’d probably get more matches/ hits/numbers if you lie and make your age younger (or present yourself younger in other ways) but you won’t actually get to sex with these women since many of these newly “interested” prospects will actually be Type Ones (who you won’t get to sex with no matter what you do) and Type Threes (who you won’t get anywhere with unless you have very strong game, do everything right and really take your time).

They want the things that make older men different from younger men. This means you should not only not try to act younger, but instead you should play up the qualities that older men have over younger men.

Here are the seven qualities of older men, or at least those qualities that Type Two younger women perceive older men to have that you need to place on full display. They are listed in no particular order.

I’ve talked about confidence in great detail, including exactly what it is and how to exude it in The Unchained Man and Get To Sex Fast. Younger women assume, usually correctly, that older men tend to be more confident than younger men. Just the act of appearing older and more mature can often give the illusion that you’re more confident.

Of course, you should actually be more confident too, or at least fake it until you make it (in the case of older men who are out of practice because they’ve been monogamous for so long).

Older men are perceived to have stronger personalities, stronger wills and more mental toughness. The more of those traits you can exude when talking to younger women, the more successful you will be.

This kind of strength does not mean you’re an asshole (with one exception I’ll get to in a minute). It is indeed possible to be a very strong, tough, nice, polite guy. A true Alpha Male knows how to exude massive inner strength while being relaxed and smooth without being overbearing or a jerk. This is much easier for older men than it is for younger guys in their twenties.

This is huge and should go without saying. This is also one of the biggest reasons why younger women/older men couples are becoming more common. Younger men in the Millennial and Generation Z categories seem to lack the motivation and drive of prior generations. I realize some of you younger guys will start bitching and defending this but we’ve already had that conversation here and here.

The point here is that since we live in a society where, right or wrong, younger men are perceived to have no motivation and drive, it’s much easier for you as an older guy to demonstrate those very traits and stand apart because of them.

Numerous times over the past 12 years I have been dating much younger women and when I tell them I can’t hang out with them because I’m busy working in my exciting (to me) businesses, their attraction for me skyrockets even though they complain I’m being selfish or an asshole. Read this for more information on exactly how that works.

This is basic SMV stuff and you don’t need me to explain this to you. Obviously if you present yourself as more successful as an older man it will help with the younger women. As I’ve said (and proven) many times before, it’s not mandatory, but it does help.

This goes hand-in-hand with motivation and drive. Younger women notice that when an older man starts a project that’s important to him, he is more likely to single-mindedly focus on that project in ways many younger men can’t or won’t. 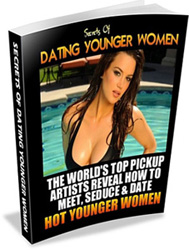 Focus is also a core trait of masculinity and thus attractive to females. It’s much more difficult for women to sit down, put their heads down and TOTALLY FOCUS on ONE THING for a LONG TIME. We men are much, much better at this. It’s how our brains are designed. The more you can show women, particularly younger women you have this ability, the better.

Having Your Shit Together

Again, this is something that is more helpful now than it was 30 years ago when most men of all ages had their shit together, including guys in their early twenties. Today, you have to look well past age 35 to find men who have all of their shit together in life, emotionally, physically, financially, career-wise and so on. That means if you’re over 35 and have your shit together, you’re much more attractive to younger women now than at any other point in modern history. It’s a very nice place to be.

As I’ve discussed at my blogs before, as the West continues to collapse, this age of 35 where men have gotten their shit together is going to rise. Soon, women will have to look for men over age 40. Then 45. All that does is benefit you as an older man… assuming you have your shit together of course. (Which means that if you’re an older man and you don’t have your shit together, you’ve got some catching up to do and you’d better stop fucking around right now and get your ass to work.)

Not Tolerating Any Drama or Crap

The biggest difference between younger men and older men in terms of relationships with women is that younger men will tolerate all kinds of drama, bullshit, arguments, insults and other garbage from women where older men generally will not.

This was certainly true with me as a younger man and it was probably true with you as well. Remember back when you were in your twenties… all those long, drawn-out arguments you had with women you were dating. Do you put up with that shit now? Probably not. Today you probably just kick their little asses out the door.

Not putting up with a younger woman’s crap, this father-like authority to shut shit down with her before things get heated or irrational is yet another one of these attraction factors that you must demonstrate. It’s one of the biggest things that will separate you from the younger men her age.

I suggest you rank yourself on each of these seven items and give yourself a score of 1 to 10. If any are below an 8, you should set a goal to get them to at least an 8, if not higher.

When you do, your results with younger women will improve. They can’t not improve.